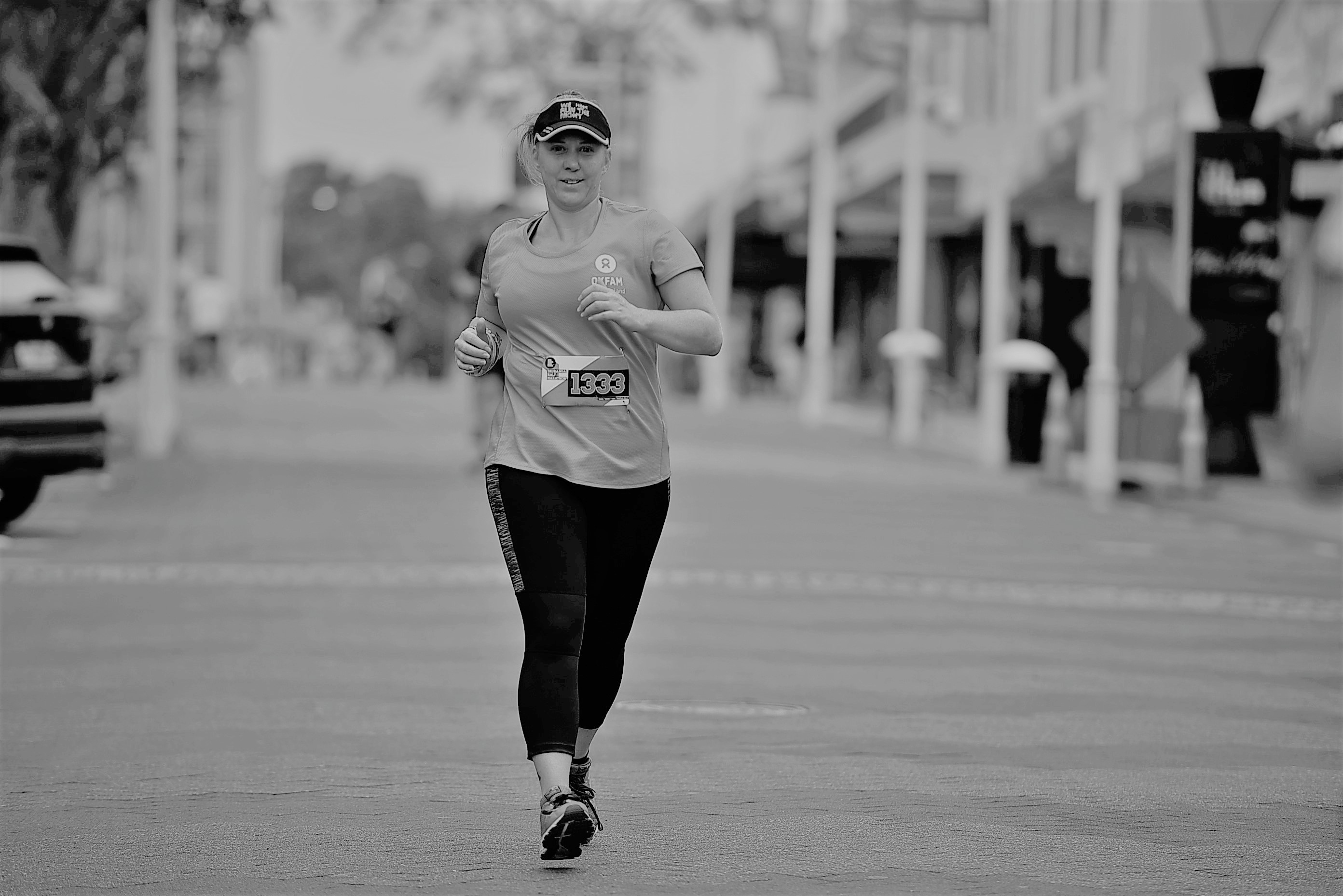 My parents were both extremely active so it was only natural, that as a kid, I would follow suit! I was a very quiet, somewhat anxious child but participating in activities and sports helped foster my self-confidence and as that grew so too did the noise levels! My parents had a ‘don’t knock it ‘til you try it’ policy and encouraged me to give every available activity a try.

From the age of about 3yrs up until I left school I had participated in 17 different sports and activities. I found my true loves were hockey and cricket and I dedicated a great deal of time to these pursuits; captaining my cricket team and playing at a district rep level at both for a time.

After studying, I received a rude welcome to the working world as I found I wasn’t very good at time management or scheduling! After long, taxing days working I came up with reasons not to exercise and my activity would consist only of sporadic walks and the occasional hockey game. In my mid twenties, I met my husband who was not very active either but was keen to get into tramping and wanted to give strength training a try. We lifted weights seriously at least three times a week for several years and both saw amazing changes in our physical and mental states. However, he took up a new job which was quite a distance from our gym and the training fell by the way side. After another year of inactivity later, and I was generally feeling pretty unhappy.

Most of my barriers seemed to come from a lack of self belief and worrying too much about what others might think of me. I told myself I shouldn’t do things as I didn’t want to come last, I’d be embarrassed if I didn’t know what to do et cetera. At the start of 2018 I did a lot of learning around reducing anxiety and stress management. I decided that I was not the best version of me that there is and made a start on self development. I realized that I was just wasting time and it was boring being comfortable and doing the same things over and over.

I began my most recent physical activity journey when a workmate had started attending a women’s only bootcamp with great success and she invited me along. A year later I’ve seen changes in my body, gained confidence, fitness and strength and I have never looked back! Additionally, a friend talked me into signing up to run a half marathon with her but she was too sick to do it. Although the idea of going alone made me quite anxious I decided to be brave and just go and find out what running events are all about. I didn’t run a great time but I felt a huge sense of achievement at starting, not to mention finishing!  I began to really step out of my comfort zone and started finding out new things about myself and trying new things…

I discovered that the running community is generally a very supportive, friendly bunch of people and now I try to extend that to other new runners. I’m now convinced that I am not in competition with anyone and it doesn’t matter what anyone else thinks anyway. I know I’m never going to win races but as long as I am trying my best to be a better me than I was yesterday then I am winning at life.

Currently, my main activity is running and I try to attend as many of the great events we have all over NZ as I can, particularly those of half marathon distance. In saying that though, I’m the type that gets bored easily so I like to have lots of variation in my activities! I try to fit in some activity every day whether it’s a Youtube yoga video, a HIIT, boxing or strength training session at bootcamp, kayaking, a tramp/hike or a run.

At first my main reason for exercising (like many females) was weight loss and I focused purely on that. However, I soon realized that my feelings of worry diminished whenever I was active. My attention is turned from the stress at work and pondering what to have for dinner, to the workout itself. Rather than sapping all my energy, the break from worry helps me return to any issues with a fresh perspective. After being active I find myself to be in a more positive mindset and have more energy, and this flows into all areas of my life.

The activities I participate in all provide me with something different physically and mentally. Tramping out in the bush and camping overnight helps increase strength and endurance and makes me feel brave and capable. Yoga brings not only increased flexibility but is a great stress reliever and way to touch base with emotions and take notice of how I am feeling. I love Bootcamp for the laughs, the socialising and the support from like-minded women in a safe, comfortable space. And running is a great way to have a bit of ‘me’ time, to go out and burn off energy, think through issues and of course become stronger and fitter while doing so. Also, crossing the finish line at an event with crowds cheering, photographers snapping and your supporters waiting is an experience that’s hard to beat!

This year I hope to increase my running distance and complete a full marathon or possibly a 50km race. I would like to start playing cricket again and have just started learning to play golf. My big, scary but exciting challenge for the year is to go whitewater rafting.

My advice, is that if something interests you don’t be afraid to try it out! Don't hold back because you are afraid of what others may think. Most of the time they're either worrying about the same thing or applauding you for giving it a go!

Look out for group and club open days when you can trial an activity with other beginners with no pressure. You’re more likely to stick to something if you find it fun so don’t endure an activity just because you feel you need to exercise – there are so many options out there and it just means you haven’t found the one for you yet!

Don’t put too much pressure on yourself – starting small is still a start!

Our goal is to create a community of women and girls who share their stories and offer advice to support and inspire one another to get active. If you would like to share your physical activity journey, please contact us at info@thisisme.org.nz