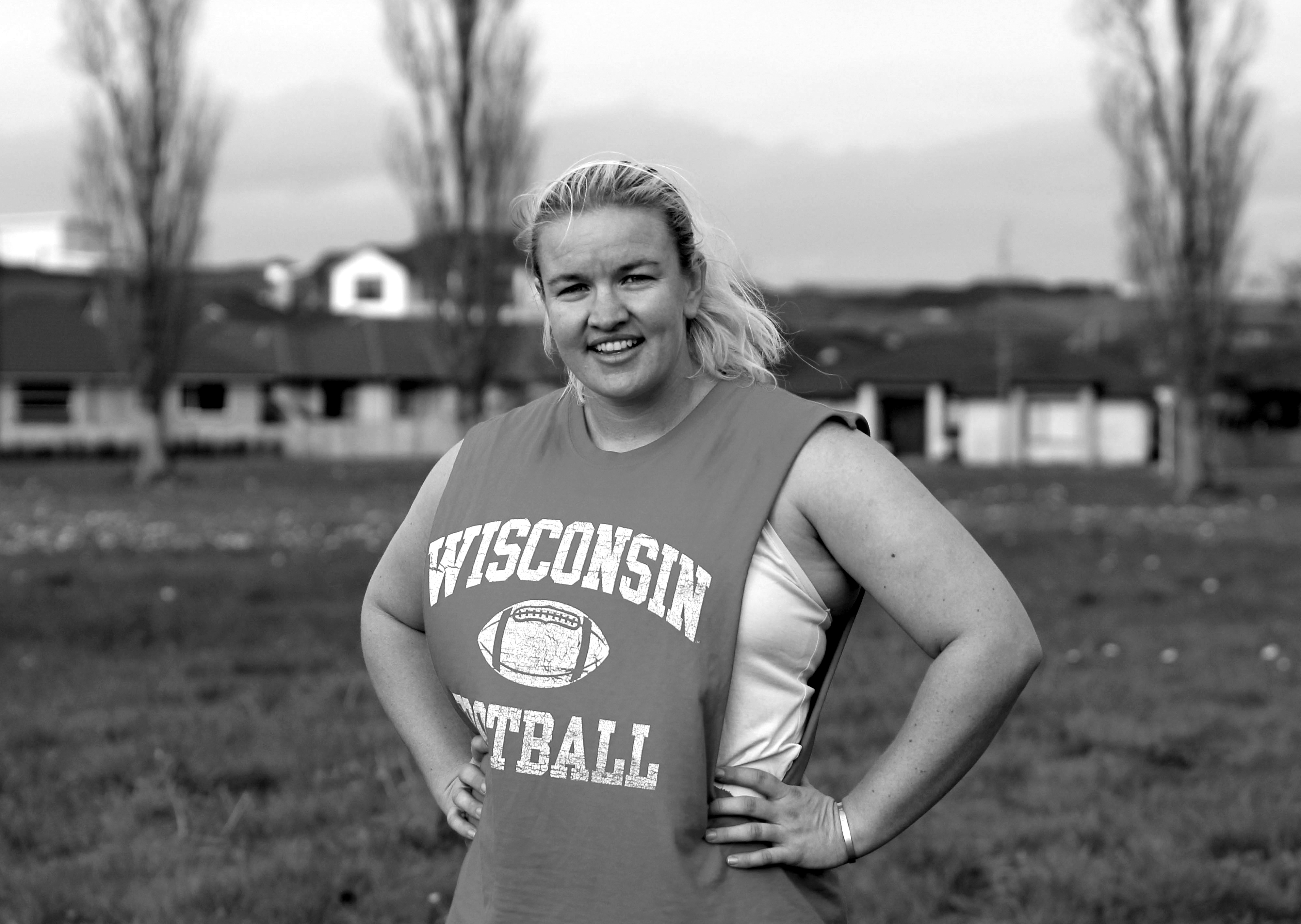 Whether it is lifting heavier weights in the gym or throwing personal bests…You definitely don’t have to be the best, you just have to do yourbest.

I grew up with parents who were elite athletes, so we were always around track and field and rowing. I participated in athletics from a young age, and played hockey through my school years. I was also a rower and road cyclist in high school. I played rep hockey during my years at intermediate and throughout my first few years at high school, as well as umpiring and playing club hockey in my later high school years. I continued to umpire hockey after high school for a year or two, as an injury prevented me from playing.

After high school, I fell out of sports a little, and didn’t really do much until arriving in Australia, which is where I began to fulfil my dreams of playing contact sports. I then took up AFL (Australian Rules Football), first complementing it with baseball and touch in the off seasons, as well as some rowing coaching. I also played rugby and American Football, which is when I started doing more training outside of assigned training nights. Recently I’ve been in the United States, playing semi-professional American Football for the Chicago Force as well as playing some softball and volleyball socially. However, after suffering an injury my semi-professional football career is over, and now I’m trying to get back to my physical best again.

Since my injury and returning to New Zealand, I am back participating in track and field with the Hamilton City Hawks, mostly working with throwing, but with a lot of speed work on the side. I like the challenges of throwing and running, as I’ve had to do a lot of work on my sprinting technique, as impact running and track running are very different - it’s always challenging. With my throwing, its about seeing how far I can get every session, and sometimes trying new things like long jumping. In addition to my track and field participation, I am an assistant coach with the Seniors team at Hamilton Hawks American Football Club. I try to make the gym regularly too, but some weeks are more successful than others. Although I am injured and unable to play, I am still involved with football, which I really enjoy. It’s great that although football is a very masculine sport in New Zealand, I am still respected as a (former) player, coach and ref.

My injury can be a barrier that I have to negotiate to be physically active in the ways I like, as I am still affected by it even though it happened about 18 months ago. Finding the time to be active is also a challenge. Being able to balance work, sport and study, as well as the other committee meetings, coaching and volunteering I am involved with can be hard, particularly as I like to train at a gym that is not open 24/7. Like lots of other women, at times, I also struggle with my motivation levels - sometimes when I have time, the motivation to be active just isn’t there. Although I experience barriers to being physically active, like everyone else, I have found ways to negotiate these so they needn’t hold me back…

Motivation wise, I have found that there just needs to be some discipline in play, because normally it’s just the motivation to get out the door. Once I’m doing physical activity, I’m as happy as a clam. Even when I feel unmotivated to go and do something I try and get myself out the door. It also helps if there is someone there to hold you accountable, like friends, family or work colleagues – if you train with, or at the same time as people, it’s easier to go and you have fun too! My time management is key in being able to balance my time, so I make sure everything I am doing for the week is written down and will try and stick to the schedule I create for myself.

My mental health and keeping this in a positive state is a big reason I stay physically active. I’ve had experiences with depression and anxiety, but have found that physical activity really helps me to combat those feelings and keep my state of mind positive. I also get a rush from being physically active and achieving the physical goals I set myself, no matter how small these may seem – there’s something so fulfilling about achieving what you set out to do! I love being able to smash goals, whether it is lifting heavier weights in the gym or throwing personal bests.

In the future, I’d love to get back onto a diamond and give softball another shot. I loved playing in the social league back in Chicago, and would relish the opportunity to play again. My friend’s father is trying to get me to do the Oxfam 100K with his running group, so that’s a possibility too. My attitude to physical activity is that you should give anything you can a go – try a new sport, do something different because you never know what you might fall in love with. You definitely don’t have to be the best, you just have to do your best! And as you move along your physical activity journey, your best will always change.

Our goal is to create a community of women and girls who share their stories and offer advice to support and inspire one another to get active. If you would like to share your physical activity journey, please contact us at info@thisisme.org.nz